Something good happens when you combine book learning with field trips — somehow the things and events that happened in a particular place seem to make more sense. I am a firm believer that being onsite can help folks to gain greater insight. Being in the geographical context of history’s happenings stirs the imagination, stimulates brain activity, promotes conversation, and inspires wonder.

Last week, my friend Brad Flurry and his sons Hunter and Drew joined me for a Texas History road trip. Since we only had a few hours before the boys had to be at football practice, I planned a route to two locations along the Brazos River — San Felipe de Austin and Washington-on-the-Brazos. San Felipe is regarded as the “Cradle of Texas Liberty” and Washington-on-the-Brazos is the place where Texas became Texas.

Before visiting San Felipe, we drove to a spot where the boys could walk down to the Brazos River. This was the perfect setting for talking about the Lone Star State’s longest river, including how it got its name and the role it played in promoting commerce in the early days of Texas. And, of course, it was also a good spot for chucking a few rocks into the river.

San Felipe was the unofficial capital of the colony that Stephen F. Austin founded at this site in 1823. Today, the folks at the San Felipe State Historic Site, a Texas Historical Commission property, guide visitors in understanding the significance of the many historical events that occurred in this community. The site features a hand-dug water well from the period, a museum, and a replica of an old cabin with toys and games from the period. 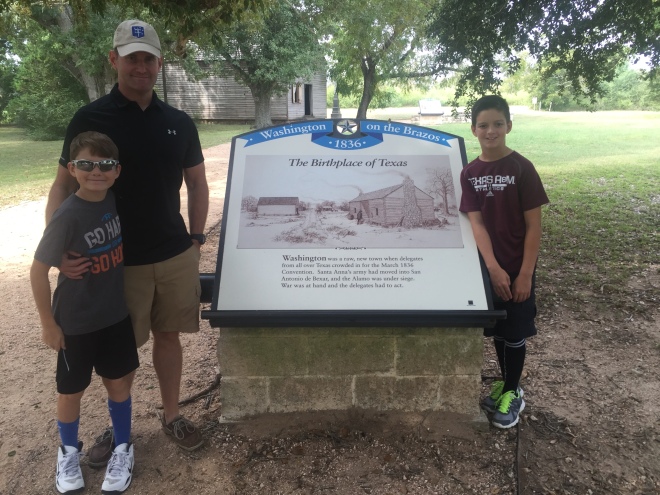 From San Felipe we drove an hour north to Washington-on-the-Brazos State Historic Site. This is the place where Texas became Texas. In March of 1836, while the Alamo was under siege by Santa Anna’s army, 59 representatives of the Texas settlements met in an unfinished frame building at Washington to make a formal declaration of independence from Mexico. A replica of this building, known as Independence Hall, marks the place where the Texas Declaration of Independence was signed. 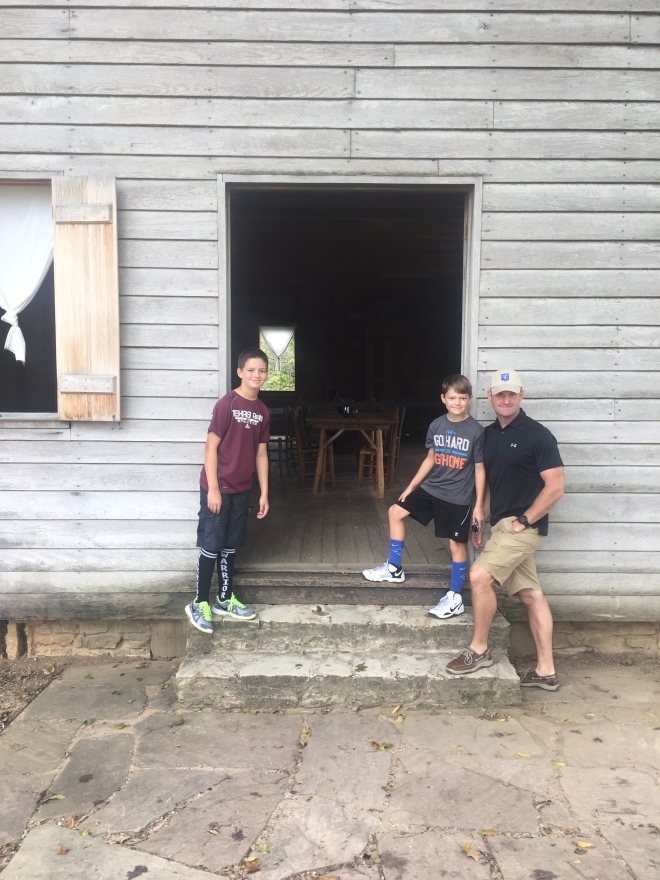 From Independence Hall we hiked to a scenic overlook of the Brazos River and talked about the Runaway Scrape of 1836. As Santa Anna’s armies swept eastward from San Antonio, panic set in among the settlements of Texas. Colonists gathered personal possessions, abandoned their properties and headed eastward under difficult conditions. Settlers often waited days to cross the Brazos at Washington. After the Texas victory at the Battle of San Jacinto, settlers slowly returned to their homes.

To stand at the very spot where the Texas Declaration of Independence was signed or where something like the Runaway Scrape occurred does indeed stir the imagination. And, that’s a good thing! It’s far to easy for us to live disconnected from the past, unaware of how and why we are the beneficiaries of the courage and the sacrifices of those who came before us. The best antidote to that is to personally visit the places that shaped our history.

There are no shortages of affordable day trips from wherever you live in Texas that can help you and your kids gain a greater appreciation for the history of the Lone Star State. I hope you’ll hit the road soon and embark on a Texas history road trip.