Six of the seven named peaks in Texas that are more than 8,000-feet in elevation are located in Guadalupe Mountains National Park. Of these six, three are accessible by steep and rocky trails — Guadalupe Peak, Bush Mountain, and Hunter Peak. The others can only be reached by those intrepid enough to bushwhack their way across rugged terrain with topo map and compass in hand.

On my recent visit to Guadalupe Mountains National Park, my friend Doyle Lowry and I decided to start our quest to summit all seven peaks by hiking to the top of the peaks accessible by trail. Now, just because these peaks are accessible by trail does not necessarily make them an easy win. Quite the contrary!

Doyle and I set off from our base camp at Pine Springs Campground as soon as the sun came up. We followed the winding Tejas Trail toward the junction of the trailhead to Bush Mountain and Hunter Peak. The Tejas Trail slowly winds its way up the mountain and features long inclines and gentle switchbacks that lead to ever-increasing elevations.

After several miles of hiking we reached the trailhead that leads to Bush Mountain to the west and Hunter Peak to the east. We took a ten-minute nutrition break at the trail junction and then set off on the Bowl Trail until we reached the intersection of the trail that leads to Hunter Peak. This was by far one of our very favorite hikes. The area is absolutely beautiful. But, like the other trails leading to the summits, the trail led increasingly upwards. 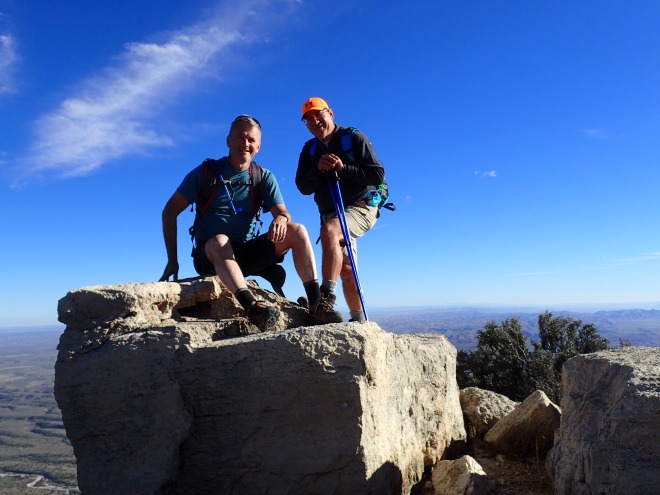 Finally, Hunter Peak came into view. When we reached the summit we were rewarded with much more than we expected. The views from Hunter Peak have to be the most beautiful in the park. Absolutely magnificent views in every direction. From the summit we could see all of the other peaks in the park as well as hundreds of miles toward the distant horizons.

We started our descent a little after mid-afternoon and slowly made our way back to base camp, stopping along the way to take more photos. We reached the lower portions of Tejas Trail as the sun disappeared over the peaks and finished our hike in the dark.

Guadalupe Peak gets lots of attention at the park and understandably so. After all, it is the highest point in Texas. However, the views from Hunter Peak rival if not exceed those from Guadalupe Peak (at least in our estimation). So, if you set your sights on Guadalupe Peak, make it a point to spend an extra day and hike up to Hunter Peak. I promise that you will not be disappointed.