When it comes to Texas towns with interesting names, Ganado is surely on the list. Located just a few miles east of Edna on Highway 59, Ganado is the second largest town in Jackson County. Ganado had its humble beginnings when a few cabins at the site of the present town came to be called Mustang Settlement, after nearby Mustang Creek. The early settlers were largely cattle ranchers who either drove their herds to New Orleans over the Old Spanish Trail or to northern markets in Kansas City.

In 1881, the Galveston, Harrisburg, and San Antonio Railway laid track near Mustang Settlement. A company official looked out the window of his rail car and observed a large herd of cattle. He casually remarked that the place should be called Ganado instead — the Spanish word for ”herd.” The name stuck and the rest is history. Sometime in 1882 the railroad built a station at Ganado and the town grew around it. A post office was established the following year.

The Ganado Cafe is one of the local businesses that has served the town for years. Located on a main thoroughfare through town, the cafe remains a popular eatery that serves up delicious meals to locals and passers-through alike. Not a very big place, it has retained its original footprint next to the town movie theater.

While on a road trip from Katy to the Rio Grande Valley, I decided to veer off Highway 59 to grab an early lunch in Ganado. When I arrived I was the first lunch-time customer of the day — although folks were already phoning in orders. It would not take long, though, before a steady stream of locals dropped in for lunch.

I ordered my usual bacon cheeseburger with a side of onion rings. I opted for water instead of iced tea since I had a large Buc-ee’s fountain drink waiting for me in my truck. I ordered my burger on a sourdough rather than a regular bun. This was definitely a very good choice. 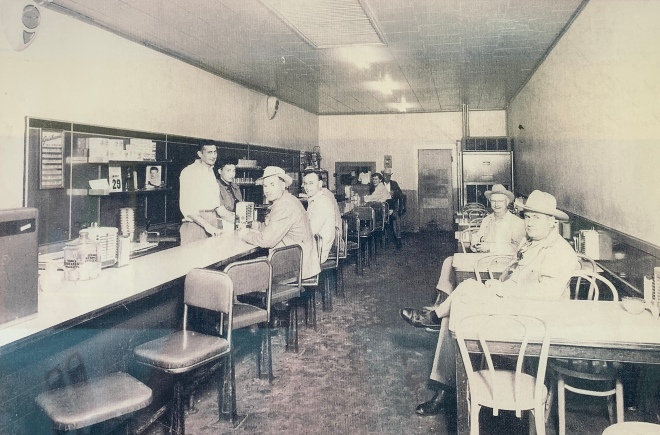 While I waited for my burger, I perused a wall of historic photos of the town, including an old black and white pic taken of the interior of the cafe sometime, I figure, in the 1940’s. I love old photographs — pics planned and taken intentionally in the days before smart phone cameras turned all of us into amateur photographers.

As for the burger, my first glance told me it was going to be good. Wrapped in gingham paper, it looked great and smelled delicious. The meat patty was generous, the veggies fresh, and the bacon crisp. One bite is all it took to convince me that I had made the right call to take a detour into Ganado. The onion rings were mighty tasty as well. 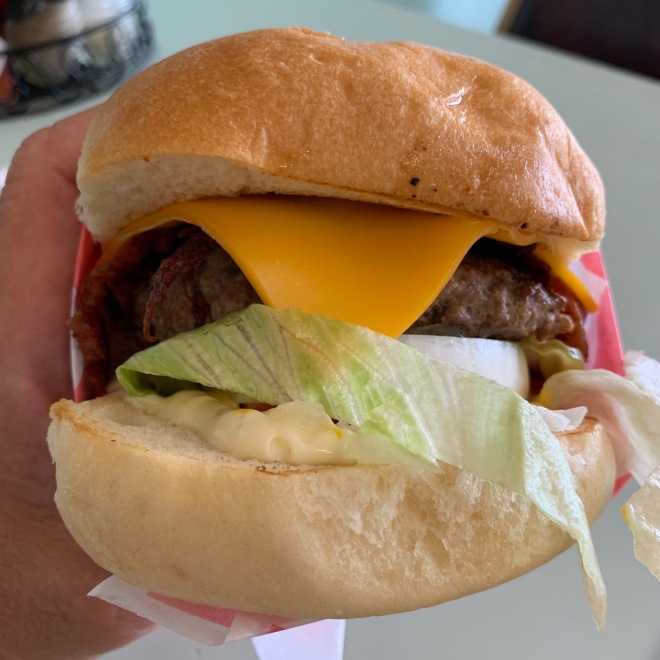 I have to confess that I could not finish my burger, something that rarely happens. Delicious as it was, it was just far bigger than my appetite. I hated to walk away and leave the last third on the plate but, alas, I was stuffed and had no more room. I did manage to eat all of the onion rings, however.

All things considered, I am really glad to have discovered the Ganado Cafe and have added it to my list of places I would like to visit again. I hope that if you find yourself anywhere near Ganado at lunch time (or anytime) that you too will veer off the main road and wander down to this quaint small-town eatery. You will not be disappointed!