When it comes to outdoor adventures in the Lone Star State, the Franklin Mountains have much to offer. Franklin Mountains State Park is located at the westernmost tip of Texas and is the largest urban park in the nation. The park encompasses more than 26,000 acres in the city of El Paso, and yet once in the park, you would never know you were anywhere near a city.

The Franklin Mountains are roughly three miles wide by twenty-three miles long and divide the city of El Paso. The range rises to an elevation of more than 7,000 feet above sea level and offer some of the best hiking and biking trails in Texas. The state park has some of the best camp sites of any state park — every one with a beautiful view of the mountains.

The Aztec Cave Trail is one of the most popular hiking trails in the park. According to local lore, early El Pasoans reportedly found bones and other Native American artifacts in the caves. However, they mistakenly concluded that the early inhabitants were Aztecs and the caves soon became known as the Aztec Caves.

The trail to the caves is not long but it is steep. The trail is well-marked and well-maintained. There are a couple of primitive campsites along the way for visitors who want to spend the night at campsites located a bit higher than the other sites at the park. These are definitely bring your own water sites. 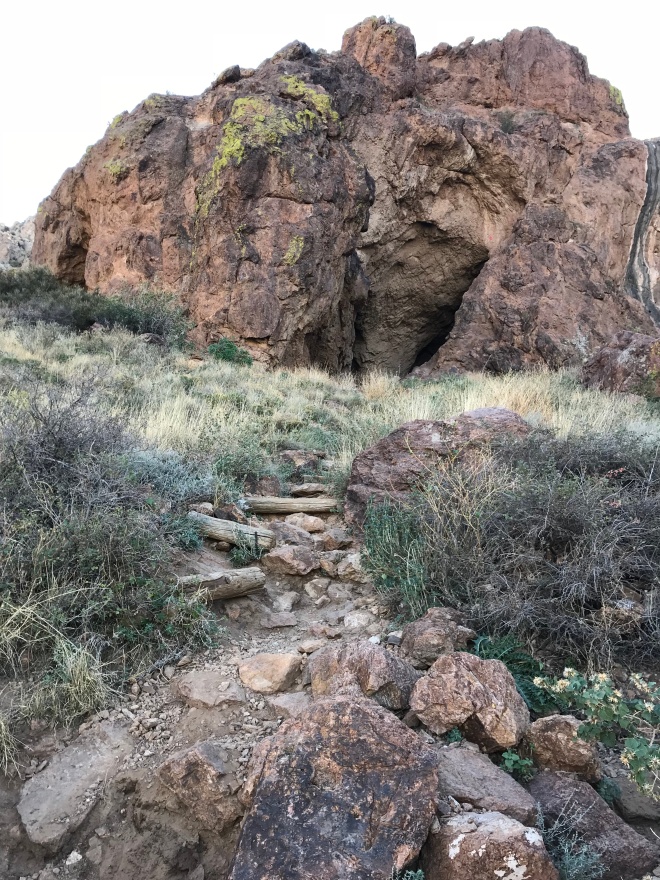 At about a half-mile into the hike, the trail becomes increasingly steeper but very manageable for hikers. I hike with trekking poles which make sections like this a bit easier to negotiate. The payoff at the end of the trail makes the hike absolutely worth it all. Once you arrive at the caves it is easy to understand why native peoples were drawn to places like this.

The view from the caves is absolutely magnificent. The ceiling of the main cave is stained by smoke, evidence that ancient peoples once spent time here and enjoyed the same beautiful vistas that visitors today enjoy. I’m glad that sites like this have been preserved by the Texas Parks and Wildlife system for us and future generations to enjoy.

If you enjoy hiking you will definitely enjoy the Aztec Cave Trail and the several other trails at Franklin Mountains State Park. If I lived in El Paso I would make it a point to visit and hike these trails as often as possible. As for me, I am already making plans to return to the Franklin Mountains to hike again.

One thought on “Hiking the Aztec Cave Trail”