On July 28,1866, Congress authorized the creation of units made up of black enlisted soldiers to serve in US Cavalry and US Infantry regiments. The Plains Indians equated the skin color, hair type, courage and tenacity of these black soldiers with that of the buffalo — hence the nickname “buffalo soldier.”

Buffalo soldier units served in the 9th and 10th US Cavalry regiments and the 24th and 25th US Infantry regiments. Soldiers from all four of these regiments served at Fort Concho from 1869 to 1885, comprising half the soldiers stationed at the post. Fort Concho, in modern-day San Angelo, was built after the Civil War to establish law and order and to protect settlers from Indians. 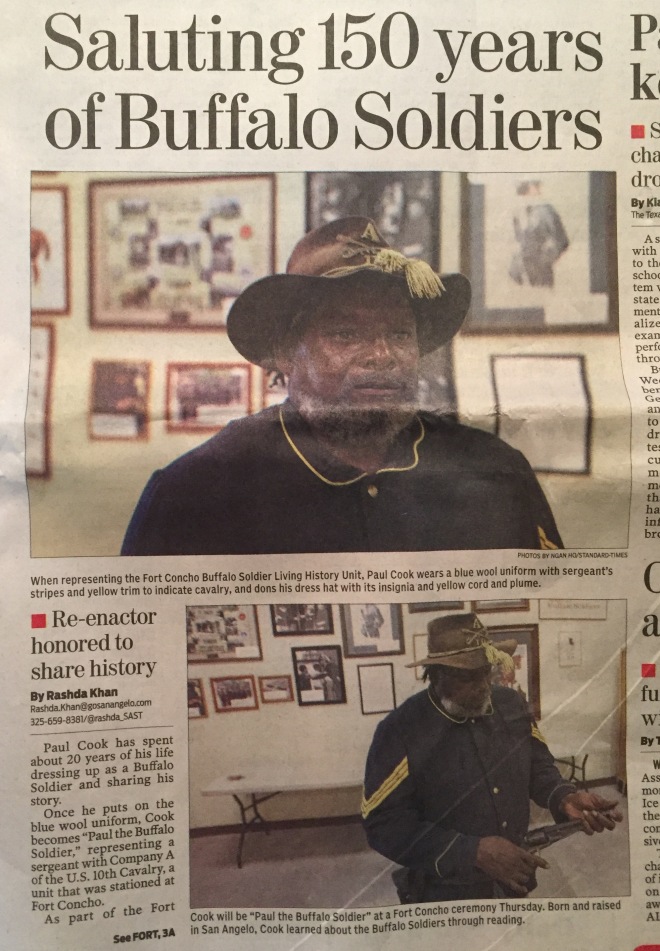 This summer, Fort Concho observed the 150-year anniversary of the Buffalo Soldiers. My wife and I happened to be in the area so we attended the celebration at the fort. While there we had the opportunity to meet Paul Cook, a Buffalo Soldier re-enactor as well as listen to a talk by John Langellier, a historian and the author of “Fighting for Uncle Sam: Buffalo Soldiers in the Frontier Army.”

I had heard about the Buffalo Soldiers but did not know much about them. So, I was excited to attend Langellier’s talk. The contribution of these tough soldiers to the westward expansion of our nation must not be underestimated. Buffalo soldiers did everything from building roads to patrolling the frontier to a variety difficult civil and military tasks. Additionally, they distinguished themselves in campaigns against numerous Indian tribes. 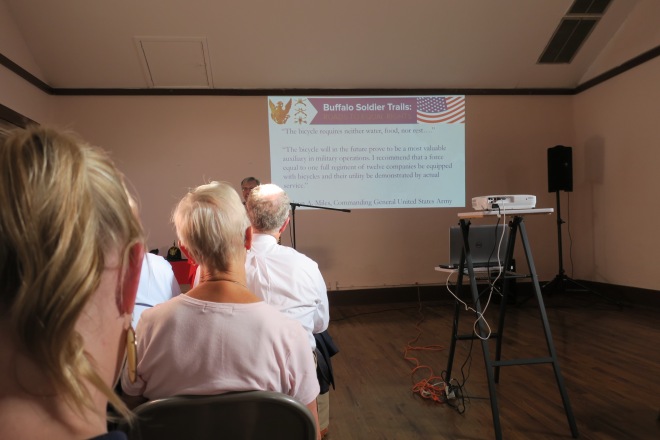 The most amazing thing I learned about Buffalo Soldiers was the history of the all-black 25th Infantry Bicycle Corp. At a time when the military did not want to spend money providing horses for these black soldiers, a white lieutenant names James Moss persuaded the military to provide them with bicycles. The military agreed and provided the Buffalo Soldiers with heavy duty bicycles made by the Spalding Company.

To show the practicality of the bicycle for military use, Moss organized a ride from Fort Missoula to Yellowstone National Park and back again — a trek of 800 miles over rugged terrain. He later organized a 1,900 mile ride from the fort to St. Louis. All of this at a time when there were few roads, bicycles were terribly heavy and had a single gear, and the men had to strap all of their gear to their bicycles.

Amazing does not begin to describe the achievements of the bicycle regiment — a testimony to just how tough the Buffalo Soldiers were. As a mountain-biker who owns a pretty decent bike with lots of gears and suspension to make riding the trails easier, I have the deepest respect for the Buffalo Soldier cyclists. Wow! These guys were the definition of what it means to be tough.

Buffalo Soldiers are an important part of our history. Their history is part of the fabric of our rich Texas history and deserves to be told and retold to future generations. They helped to ensure the settlement of frontier regions of Texas and beyond. Happy 150-year anniversary to the Buffalo Soldiers of yesteryear!